A couple of years ago, as my 20-something daughter was heading out to run some errands, I asked her to stop at the liquor store to get a six-pack of nonalcoholic beer. Chatting with the clerk, she mentioned that it was for her dad. “How long has he been sober?” he asked. “Um, he’s not,” she replied.

She was right, in the sense that he meant. I’m not a recovering alcoholic, so I’m not putting myself at high risk on the occasions that I have a real beer. I just usually drink the teetotaler’s mix because I prefer it. Also because a couple of drinks tends to put me to sleep.

OK, so maybe I’m not the guy you want planning your bachelor weekend in Vegas or your football tailgate. My sister, a serious wine buff, has been known to greet me singing, “Every party needs a pooper, that’s why we invited you … ” It’s not that I don’t drink. It’s just that I can make a case of real beer last longer than the NBA season.

This may sound unfortunate, especially considering that my youngest stepson and my daughter-in-law operate their own craft brewery in Atlanta. In that respect, I may be considered a waste of a stepdad.

There may be wisdom in my habits, though. For years, people have been told that moderate drinking is a boon to health. But a recent study published in The BMJ (formerly the British Medical Journal) reached the, um, sobering conclusion that when it comes to the health of your brain, there is “no safe level of consumption.”

As one researcher told CNN, “The more people drank, the less the volume of their gray matter.” Most days, my existing gray matter seems barely adequate. Alcohol is even more damaging than other avoidable risks, including smoking.

This study was no outlier: It echoed the findings of previous studies. An accompanying editorial said the results “strengthen the argument that drinking habits many regard as normal have adverse consequences for health.”

So for anyone who likes a daily beer, cocktail or glass of wine, or a few of them, these are grim times. But for anyone inclined to cut back or give up their favorite beverage, there is good news: We have entered a golden age of nonalcoholic beer.

I used to drink more and liked the taste of beer too much to give it up. For years, the old nonalcoholic versions were bland and insipid, which served only as a bleak reminder of what you were missing in the real thing. Most restaurants and bars stocked only one alcohol-free brand, if any, and servers often seemed baffled when asked about their offerings. In social settings, abstaining has always been slightly awkward.

But per capita alcohol consumption is significantly lower today than it was a generation ago. Three of our past four presidents, including the current one, were teetotalers, and no one cared. The industry has begun catering to nondrinkers, occasional drinkers and the “sober curious” with new alcohol-free brews that have authentic flavor and body.

It was a joyous surprise when, on a recent trip to the grocery store, I spied something new: a nonalcoholic IPA from the granddaddy of craft breweries, Samuel Adams. I am not in the business of product endorsements, but reader, I bought it, and I was not sorry I did.

The rush is on. Heineken now offers its own “0.0.” Guinness, whose stout has sustained many a pub in Ireland and beyond, has come out with an alcohol-free version that it says has “the same beautifully smooth taste, perfectly balanced flavor and unique dark color of Guinness.” At least one company, Athletic, makes nothing but nonalcoholic craft beers.

But the most vivid proof of the shift came a few weeks ago when I attended a Chicago Cubs game at Wrigley Field. When it came time for “Take Me Out to the Ballgame,” the video board showed the late broadcaster Harry Caray leading the crowd — next to an ad for Budweiser Zero, “the official brew of the 7th-inning stretch.”

At Wrigley, once known as the world’s biggest outdoor singles bar, that came as a surprise to me. Fun at the old ballpark, stone cold sober? What a concept.

Those of us who prefer our beer without the buzz may always be a minority. But right now, we’ve got a pretty good party going. The Mysterious Unpopularity of Kamala Harris 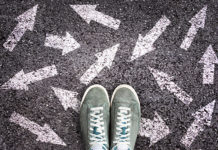 The CDC’s Radical Shift In Direction