The public interest group, Judicial Watch obtained graphic crime scene photos taken at the site of a 2013 gang-style assault on a Phoenix, AZ, apartment building, including a close-up photo revealing the serial number of the AK-47 rifle used by the assailants. As a result of Judicial Watch’s October 2, 2014, public records lawsuit, the weapon has been already traced to the Obama Department of Justice (DOJ) Operation Fast and Furious gunrunning program. The photos were also produced by the Phoenix Police Department in response to this lawsuit (Judicial Watch v. City of Phoenix (No. CV2014- 012018)).

According to press reports at the time of the assault, police investigating the shooting that left two wounded found an AK-47 assault rifle in the front passenger area of a vehicle that had crashed into a fence surrounding the apartment complex. Inside sources informed Judicial Watch at the time of the crime scene investigation that the AK-47 used in the assault had been provided to the assailants as part of the Obama-Holder Fast and Furious program. On October 16, 2014, Judicial Watch announced that, based upon information uncovered through its October 2 public records lawsuit, the U.S. Congress had confirmed that the rifle was tied to the Fast and Furious operation. Attorney General Eric Holder has already admitted that guns from the Fast and Furious scandal are expected to be used in criminal activity on both sides of the U.S.-Mexico border for years to come. 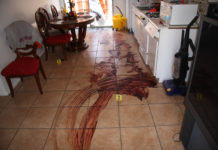