Oak Island Mayor Betty Wallace told the Wilmington Star-News that the second attack “happened so quickly” that there was little time to alert other swimmers and that there wasn’t enough time to get everyone out of the water.

It was not known if the same shark was responsible for both attacks.

Oak Island Mayor Betty Wallace told the Wilmington Star-News the second attack “happened so quickly” that there was little time to alert swimmers.

The girl, who was not identified, lost part of her left arm and remained in danger of losing her left leg in the attack which occurred at about 4:40 p.m., officials said. About an hour later, medics were called in response to a second attack about two miles away. The teen lost his left arm in the attack.

Both victims were in fair condition Monday at a Wilmington hospital.

“Our local police ATVs and the sheriff’s boat and helicopter patrolled immediately after the second (attack) getting everyone out of the water,” Mayor Wallace said in an email to The Associated Press. Wallace said even if the beach had closed after the first attack, the order might not have covered swimmers farther up the beach.

“I don’t know if it would have extended between the two (locations),” she wrote.

Both victims were in waist-deep water, about 20 yards from shore when they were attacked in an area where another girl was badly bitten last week.

Officials opened the beaches on Monday as officials encouraging people to stay in shallow water, Holloman said. Brunswick County dispatched a boat and helicopter to patrol the water.

Brian Watts, Brunswick County’s emergency management director, told the press late Sunday that both victims were out of surgery after being attack near the Ocean Crest Fishing Pier, a popular tourist attraction according Fox 8 reports. Some speculate that the sharks may have been attracted to bait tossed in the water by dockside fishermen.

According to a report in the Wilmington Star-News, George Burgess, director of the Florida Program for Shark Research at the University of Florida’s Florida Museum of Natural History said sharks seen along Carolina coasts are mostly blacktip and spinner sharks which can grow to 6 to 7 feet long.

Burgess said sharks do bite people in “mistaken identity situations,” in which the sharks think a human’s splashing arms or legs are activities of normal prey. 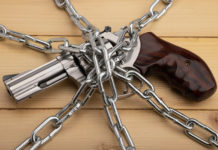